When you are able to equip some of the higher tier abilities for solo questing, this build is feasible for higher level 40-50+. You should be able to take on very large groups without dying with this build.

This is how your ability bar should look like:

A simple rotation would be:

If your preferred role is not a tank but you wish to play DK in a group with friends, or if you wish to be a damage dealer and want to play a Dragonknight, your basic go-to is Dual Wield. This build will not only give you good crowd control, self-healing, and survival abilities, it will also ensure AoE damage across the board. And since the Dunmer (Dark Elf) is the only race with added bonus to experience gain for Dual Wielding, this build works best for them.

The skills on your ability bar for this build should be:

For this build, the rotation are:

If you are using Dragon Leap instead of Dragonknight Standard as your ultimate, there is much that can be gained if you decide to use this build for PvP. A simple explanation. Your enemies will usually be smart enough to move out of the Standard’s AoE area fast when in PvP. But they cannot block or dodge the damage from leap. So, leap will still serve you better although the standard can be moved later. Always use the standard for PvE, no exceptions even during grinding.

Dragonknights are well known to be one of the most powerful warriors here at Elder Scrolls Online. Although the solo gameplay of these warrior types can be fierce, Dragonknights can also be played well in a group. The Dragonknight class can be specially trained for a group or solo gameplay. To build your character to be fit for group gameplay, however, you must consider the race, the skill tree, and some gameplay strategies. 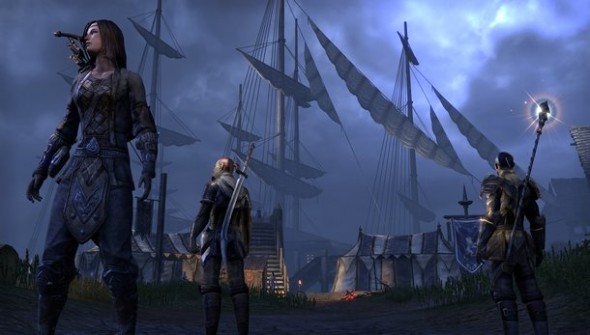 Health restoration and regeneration are important for your character when playing for group mode; you would be needed to increase your teammates’ strength and defenses without worrying too much on health. The suggested races for tanking build would be Nord, Khajiit, and Orc. They all have Robust for one of their natural race abilities. This specific ability allows them to regenerate their health by 5% while in combat.

The recommended eso dragonknight skill tree to follow would be the Earthen Heart. Many of the attacks may be long range, but you are also allowed to somehow disable and slow down your enemies. That way, you and your allies, especially the elder scrolls nightblade, would be able to work together as a team and take every single one of the enemies down.

The Stonefist and Molten Weapons skills under the Earthen Heart skill tree will both play important roles in gameplay strategy. Since Stonefist not only damages but also knocks out an enemy for a couple of seconds, you can use this attack on multiple enemies and give your teammates a chance to finish these enemies off. The Molten Weapons skill would be best used right before and throughout the entire battle. Using this and Stonefist in a group in this special manner is sure to help you and your team grow.

Another skill to unlock after Molten Weapon is Obsidian Shield. This skill should be used in the same way as the Molten Weapon skill. The final two attacks you can unlock are the Petrify and Ash Cloud skills. These are the two skills will that disable your enemies. It could probably depend on your enemy, but using these two skills interchangeably in some sort of pattern can also count for a good eso dragonknight guide. For example, you could use the Petrify skill first and use Stonefist on most if not all of the enemies. The enemies your teammates have not finished off that are fit to attack again can get hit by your Ash Cloud attack.

The info below is a bit out of date as it refers to the beta. If you happen to be looking for an up-to-date reference for your Dragonknight, I suggest this eso guide . It includes some killer advice on leveling up, builds, skill rotation, and gold farming.

The Dragonknight class in The Elder Scrolls Online will be one that mainly concentrates on melee DPS as well as tanking. They will most likely be the main tanking elder scrolls online class of the game due to the skills they have available. They also utilize a solid number of abilities that have magical effects.

Dragonknight tanks will want to focus primarily on the Draconic Power skill line, which where is where the majority of their tanking abilities and passives will be. Active abilities such as Spike Armor, Inhale and Reflective Scales will be vital for reflecting damage and preventing damage. Dragon Blood is the Dragonknight’s self-heal and heal-over-time ability that will also be vital.

The Dragonknight gains access to some extremely important tanking passives in the same skill line. Iron Skin increases block while Burning Heart boosts the amount of healing you receive. Elder Dragon increases health regeneration and Scaled Armor increases spell resistance. All of this will most likely be mandatory for endgame tanking. The Draconic Power ultimate ability is called Dragon Leap and is a leap attack that deals massive area-of-effect damage as well as performs a knockback. This will be a great way to open combat.

As far as other Dragonknight abilities go, the Ardent Flame skill line as well as the Earthen Heart skill line both have some interesting options. Fiery Reach, which is in the Ardent Flame tree, will most likely be vital for tanks as it can be used to pull an enemy directly toward you. Other Ardent Flame abilities include damage-over-time effects and area-of-effect attacks. These may be useful if you’re looking to go the route of a tank that can also deal serious damage.

In the Earthen Heart skill line, Dragonknights can choose earth-based attacks and buffs that serve a more supportive nature. Obsidian Shield is a damage absorption shield that looks like it may be particularly useful for tanks. Ash Cloud can also be used to cause enemies to miss more frequently, which will be useful. The Earthen Heart ultimate, which is called Magma Armor, will also be useful as it will lower the amount of incoming damage significantly.

Since the Dragonknight can be built offensive or defensive, tanks will be able to choose which direction to go in based on their favored playstyle. Once we know how difficult endgame encounters will be in TESO we can begin to speculate as to which builds will be the most prominent.

Avatars by Sterling Adventures
Scroll Up