The Jack of all Trades
This build eliminates the need to re-assign different skills to your hotkey bar. In other words, it include skills that will benefit your gameplay at any given point. This build requires the Dunmer race to have a high resistance to fire because fire is the most common damage type in both PvE and PvP settings. It can be good for gold farming as well. This race also boosts your fire damage and increases DPS on fire-based attacks. Examples of fire attacks include banner, flame whip, impulse, and searing strike. All of these moves are practical for PvP and reinforces the need for this damage buff. The general consensus is that a Dragonknight’s most effective move for dealing damage to other players is the fire ballistae.

Equipment
First, put 49 points into Health. You can regain stamina and health by using potions that increase spell crit, restore both stamina and health. You can use most enchants until you get one of the rarer VR enchants; enchants don’t matter too much. Equip two dominion rings in your jewelry slots. These rings along with the Destroy Staff give you an added 10 percent in spell crit bonus. Other passive abilities include a 70 point increase in health.

Skills
Shield Charge allows you to prevent others from damaging you and your group. It interrupts their positioning which indirectly leads to less damage on your group. Caltrops, despite having a big cost in stamina, coupled with Choking Talons make it easy to set up on choke points and allows any impulsers on your team to deal extra damage. Flame Whip works with the boost in fire damage discussed earlier. The Dragonknight’s Ultimate guide, Werewolf Transformation, is useful for its passive abilities and not its active. 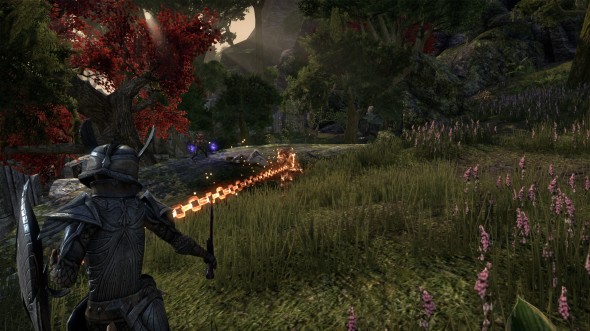 Avatars by Sterling Adventures
Scroll Up